AARP Public Policy Institute finds a 6 percent increase in antipsychotic use in elderly with dementia who are living in the community, even though they are not approved for such use

By Dr. Anju Mathur on May 10, 2018
Share this:
FacebookTwitterLinkedinRedditTumblrGoogle+Pinterest

A new study conducted by the AARP Public Policy Institute has found a more than 6 percent increase in antipsychotic use by elderly dementia patients living in the community (as opposed to living in nursing homes) between 2012 and 2015, even though the drugs are not approved to treat dementia.

In fact, in 2008, because of the link found between antipsychotics and an increased risk of death in elderly dementia patients, the U.S. Food and Drug Administration (FDA) ordered antipsychotic drug manufacturers to include a black box warning (it’s most serious warning) on the drug labels and prescribing information stating the dangers.

There have also been 15 other international drug regulatory agency warnings on antipsychotics causing serious side effects in dementia patients, including:

In this new study, the authors analyzed claims data to calculate annual rates of antipsychotic use among community-only adults ages 65 and older who had dementia and were enrolled in Medicare Advantage (MA) plans from 2012 to 2015. They found that antipsychotic use increased by 6.3 percent between 2012 and 2015, from 12.6 percent to 13.4 percent. Antipsychotic use was higher among women than men (16.2 percent v. 14.2 percent) and older adults with dementia (ages 75+) were more likely than the younger age group (ages 65–74) to have a prescription for antipsychotics (12.8 percent v. 12.0 percent).

The authors stated, “While decades-long efforts to reduce AP [antipsychotic] use among dementia patients living in nursing homes are showing some success, less attention has been given to the practice outside nursing homes.”

According to the National Partnership to Improve Dementia Care in Nursing Homes, an initiative launched in 2012 by the Centers for Medicaid & Medicare Services, antipsychotic use among nursing home residents declined by approximately 34 percent from 2012 to 2015.

The AARP authors concluded: “Our findings affirm a conclusion reached in the 2015 GAO report that while AP use has declined in nursing homes due to several proactive measures, the Department of Health and Human Services has taken little action to reduce AP use among older adults living in the community…. Reducing the AP use rate among dementia patients living in the community is imperative, especially because many nursing home residents begin AP use prior to their arrival at the facility. Our rising estimates of AP use indicate that still not enough is being done to solve this problem.” 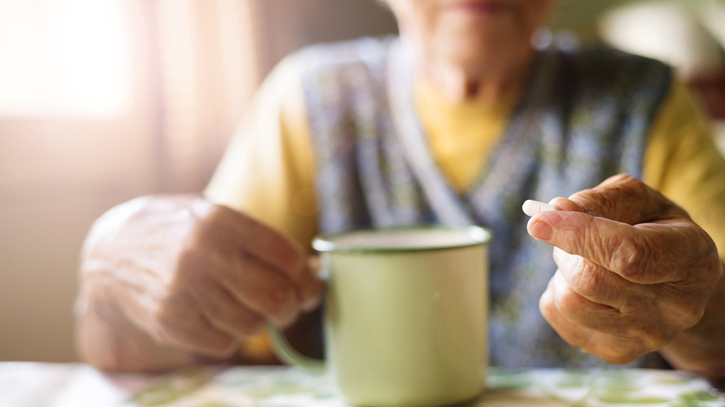